I went to prison today. Not for drug possession. Or getting in a bar fight. Or for unsightly PDA. But for a Thai Massage.

Chiang Mai’s Women’s Correction Facility offers Thai Massages by their inmates. I was expecting the “massage parlour” to be in a uncomfortable, brightly lit room, surrounded by metal bars and gun strapped prison wardens. Instead it was in a building across from the actual prison with no bars or fences holding the girls back. Just two wardens and as far as I’m concerned there was no real difference to a “real” massage parlour.

I got a pink two piece thing. And I needed help putting it on. Super confusing let me assure you.

I was greeted by a typical super groomed and smiley beautiful Thai girl in a green, two piece massage uniform. I was asked to take off my shoes, if I wanted a Thai or foot massage and if for 1 or 2 hours. I’d never had a Thai massage before and man, shit can get intense. There was pulling and cracking of fingers (so next time someone tells me off for cracking my fingers I’ll tell them I learnt to do so in Thailand and it’s totally medicinal), bending of the leg in places it shouldn’t bend, smacking and yanking. But the pain was worth it; I left feeling as fluffy as a marshmellow. 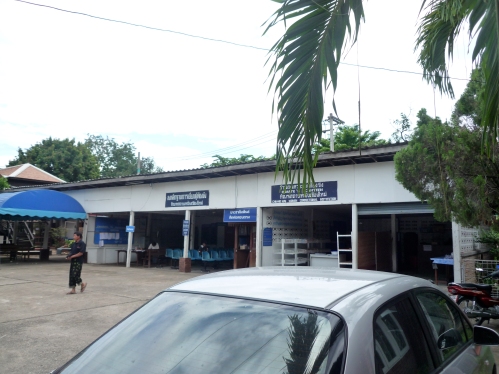 I got talking with my massage lady at the end of my session when I was sipping on some herbal tea and she told me a little bit about herself and the prison:

200 people sleep in the same room on shitty mattresses, when you are a masseuse or cook (the prison also has an inmate-run restaurant/cafe) you “only” share a room with 25 other women. The prison offers a massage and cooking academy to teach inmates skills so that they can get a job once outside. The inmates working now get some of the money the prison makes with their skills but she didn’t know how much so that seemed a bit dodgy. 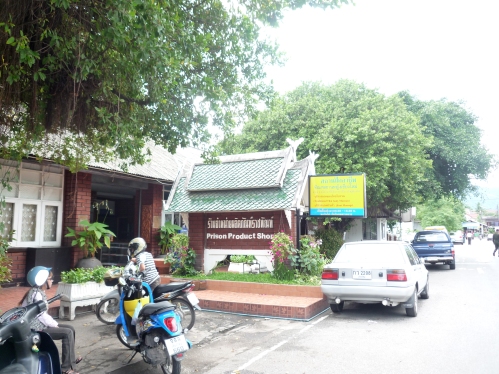 To the left is the entrance to the massage parlour. I wasn't allowed to take pictures so they're a bit lacking.

She’s been in prison for 2 years and is getting out next month. She hasn’t seen her grandmother, mom and little daughter in 2 years because they are too old to travel so far. She lost all her friends when she had to serve time and told me that she hasn’t made good friends in prison. She was super optimistic though that with her skills (she has worked in spas for years) she will have no problem getting a new start. She was so positive and radiant. It was impossible to believe that this woman had been behind bars in a room of 200 for nearly 2 years.

Though with 180 Baht (4 Euro) this massage is 30 Baht more expensive (Oh my god, 69 Euro cent!) then the ones around town it’s so worth it for the fact that you are helping these women lead a better life inside prison and eventually outside too.